The Liberal Democrats have announced they would plug funding gaps for the NHS and social care by putting a penny on income tax, in their first major manifesto commitment of the election campaign.

The tax would raise an additional £65m for Gloucestershire, with £42m for the NHS, including mental health, and £23m for social care each year.

This is the party’s flagship spending commitment and its first major policy announcement for the election. The Liberal Democrats will also set out a ‘five-point recovery plan’ for NHS and social care services in their manifesto.

At least 70% of Brits would happily pay an extra 1p in every pound if that money was guaranteed to go to the NHS, an ITV poll found last October (link).

“This morning in Gloucester the waiting time to be seen by a doctor or nurse hit a staggering six hours while Cheltenham A&E was still turning away ambulances until half an hour ago because of the night-time downgrade.  This can’t go on.  It’s blindingly obvious we need two fully-functioning A&E departments in this county and that Gloucester Royal just can’t cope on its own at night.”

“This is a national problem as well as a local one.  Our NHS Trust isn’t the only one that has plunged into deficit in the last two years of Tory government.  And the Conservative candidate here voted for all the spending plans and Budgets that are making this happen.  He didn’t even mention Cheltenham A&E in Parliament for the best part of two years.

“The Liberal Democrats are prepared to be honest with people and say that to secure the future of the NHS we will all need to chip in a little more.
A penny in the pound here could be used be to pay hard-to-recruit rates and get the doctors we need into both A&Es, while the extra money for social care would ease pressure on the NHS too.  Only the Lib Dems seem to want to make this happen.

“This Conservative government has left our health and care services chronically underfunded – and while the crisis gets worse they just don’t seem to care.

“We cannot continue asking the system to deliver more and more without giving them the resources they need.”

“The NHS was once the envy of the world and this pledge is the first step in restoring it to where it should be.

“A penny in the pound to save the NHS is money well spent in our view.

“But simply providing more money on its own is not enough and that’s why this is just the first step in our plan to protect health and care services in the long-term.”
NOTES

As an MP, Martin led the campaign to  maintain a full 24 hour A&E at Cheltenham General – one of his many campaigns for local health services – and repeatedly won assurances from Gloucestershire Hospitals Trust that Cheltenham A&E would not close.  As a councillor today, he is still campaigning against the downgrades to acute care and emergency surgery that are threatened on the new Tory MP’s watch.

Martin believes Cheltenham A&E has been under threat since acute services began to be centralised in Gloucester in 2006 and will keep campaigning against the drip-drip downgrade at Cheltenham.  He was the only local MP and the only Cheltenham politician to present evidence against the decision to downgrade Cheltenham A&E at night in 2013 when the decision was actually taken.  Current MP Alex Chalk – then the Conservative candidate – and Cotswolds MP Geoffrey Clifton-Brown both missed the meeting.

Back in 2006 Martin led the campaign which successfully saved Cheltenham’s maternity ward and warned that centralisation of acute services like neonatal intensive care posed a long-term threat to a full-service A&E at Cheltenham.  Martin has always believed that a town of nearly 120,000 people needs key services like maternity and A&E in its own district general hospital and was concerned at the drip-drip-drip shift in services to Gloucester.  In 2011 children’s emergency assessments shifted to Gloucester and in 2012 Gloucester was chosen as the county’s centre for major trauma care (such as serious motorway accidents) but still we were told A&E was safe. 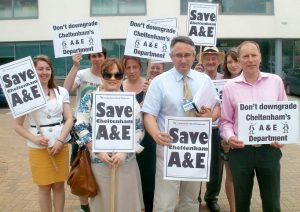 Then in 2013, in the middle of an an NHS reorganisation, Gloucestershire Hospitals Trust suddenly asked for Cheltenham A&E to be downgraded at night with ambulance admissions going to Gloucester. The trust claimed this was because they hadn’t been able to recruit the 20 consultants needed to fully staff two full A&E departments in Cheltenham and Gloucester and it would be safer to downgrade Cheltenham.  Martin was the only local MP present at the critical meeting and the only one to submit evidence based on academic medical and social research that the downgrade would be socially divisive and dangerous for higher risk groups in Cheltenham including:

As a councillor today he is demanding more data on A&E performance as a member of the county Health Overview & Scrutiny Commitee.  So far this has shown Gloucester A&E unable to cope repeatedly failing its government waiting time targets and in October 2020, during the temporary closure of Cheltenham A&E outright, leaving 16 ambulances backed up in a queue outside.

One committee of councillors could have influenced the decision and Cheltenham LibDem councillors Klara Sudbury and Iain Dobie asked the Health and Care Overview and Scrutiny Committee to vote for it to be made temporary at least.  The only Cheltenham Conservative councillor present helped to defeat their motion, voting for the downgrade to be permanent instead.

In 2016, it was revealed that Gloucestershire Hospitals Trust was facing a serious financial deficit.  Liberal Democrats in Cheltenham and in Parliament backed a substantial boost to NHS funds from a 1p increase in income tax but all local Conservative MPs backed the Chancellor’s spending plans which continue to starve the NHS of the funds it needs to restore services like Cheltenham’s A&E to full health.

It’s now clear that the local Hospitals Trust had never really tried recruit 20 consultants in 2013 and were told by local medical training chiefs that their supervision of junior doctors was inadequate. Comparisons with neighbouring NHS trusts showed they had all managed to recruit a nearly full complement of consultants.  Despite the ongoing crisis at Gloucester A&E, the Trust have not prepared any plan to return Cheltenham to a fully functioning Type 1 A&E.

Now we have fresh proposals from the trust – this time presented in the middle of a pandemic with many temporary measures in place and a crisis at Gloucester A&E.  They include centralising yet more services in Gloucester including acute medical care (closing the 24 bed unit in Cheltenham), vascular surgery and emergency general surgery (a proposal suddenly shelved just before the last general election in 2019 when it proved hugely controversial amongst many clinicians).

This would be the biggest downgrade of Cheltenham General Hospital in its history, making it no more than a satellite of Gloucestershire Royal, and not providing the full service close to home that a town of 120,000 people deserves.  An all on the watch of a Conservative MP and government who wouldn’t give the NHS the funds it needed to take the pressure of local Trusts like ours and allow them to develop strategies for more generous and local care.