Martin has campaigned tirelessly at local, national and European level for tougher action to stop climate change – and for smart planning for the inevitable effects of climate change too.

As an MP, he was a member of the Aldersgate Group which brings together leading MPs, businesses and green organisations committed to fighting climate change and was on the advisory board of the Energy & Climate Change Information Unit which actively promotes accurate and accessible facts about climate change in the UK media. As his party’s shadow environment minister, he jointly tabled the amendment to the 2008 Climate Change Bill that raised the UK carbon emission reduction ambition by 2050 from 60% to 80% and helped to develop Liberal Democrat policy that went much further and aimed for Zero Carbon Britain – a policy which other parties are gradually, painfully catching up with only now.  He opposed new coal-fired power stations, supported a moratorium on fracking and spoke out in parliament in favour of more wind, tidal, solar and other renewable forms of energy.

As an MEP, Martin raised climate issues on everything from trade to transport. He voted for the European Parliament’s declaration of a climate emergency and for the Green New Deal for the whole of Europe brought forward by his liberal renew Europe colleague Pascal Canfin MEP.  Watch short videos from Martin as MEP on EU policy affecting rainforests here, on local renewable energy here and on trade deals that support climate action here.  It is tragic that Brexit cut off our participation in climate initiatives like these when climate change is so obviously a challenge that one country can’t possibly tackle alone.

As a Cheltenham councillor, Martin has backed Cheltenham’s Lib Dem council in its declaration of a climate emergency here and its plan to get Cheltenham to Net Zero by 2030.  In his own cabinet role with responsibility for licensing and planning he is working on a plan to get all Cheltenham’s taxis to zero carbon by then and is pushing for all new private sector housing to be zero carbon (and the first step on that path has just been taken in Leckhampton!)

He was proud that LibDems in the coalition government achieved great progress on the environment:

Many of these achievements were put at risk when the Conservatives took power on their own in 2015. Support for renewables was cut, the Green Investment Bank sold off, the energy efficiency Green Deal plan scrapped with no replacement, green lights were given to new coal and oil exploitation and greenhouse gas targets are now likely to be missed. They even scrapped the target for all new homes to be zero carbon by 2016 – which would by now have meant every new home built in the UK would be climate-friendly.

Martin has consistently spoken out for tougher action both to stop making climate change worse but also for adapting to the now inevitable impacts of climate change, including at the 2014 LibDem conference.  You can watch Martin’s speech here. 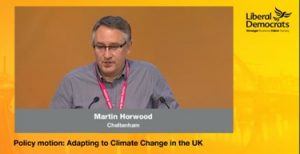 As a result of his efforts for the environment, Green Liberal Democrats elected Martin as their President, a position he still holds today.