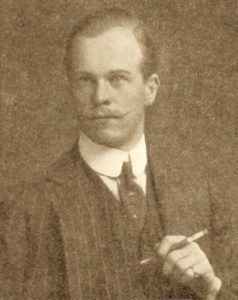 Looking for a suitable replacement for the retiring veteran James Agg-Gardner, Cheltenham Tories must have thought they’d hit the jackpot when they found the handsome Vere Brabazon Ponsonby, son of an Irish Earl, Lord Bessborough, and so himself Viscount Duncannon. He was already a commissioned officer, a barrister at the Inner Temple and a Conservative London County Councillor.  For added good luck, he was also the grandson of Lady Charlotte Guest, the wife of the Cheltenham Tories’ historic victor of 1865, Charles Schreiber.

The Liberals had won the 1906 General Election and Cheltenham in a nationwide landslide. The next election was provoked when Tory members of the House of Lords tried to block the Liberals’ radical ‘People’s Budget’ which included the first real attempt to tax the rich more heavily to benefit the poor.  In Cheltenham, Duncannon squeaked home 138 votes ahead of Liberal Richard Mathias.  At national level, the January 1910 result was equally close with Arthur Balfour’s Unionists falling just two seats short of the Liberal total.  The Peoples’ Budget duly passed but Prime Minister Asquith had no majority and another General Election was called for December.  It was another cliffhanger nationally and in Cheltenham where this time Duncannon lost the seat to Mathias by just 93 votes.  Although Mathias was then unseated on petition, the local Tories reverted once again to the trusty local Agg-Gardner as their candidate.

Ponsonby’s glittering establishment career didn’t suffer unduly.  He married his French wife Roberte in 1912, was elected MP for Dover in 1913. He served with distinction in the Great War, earning  a CMG and a place in the Légion d’honneur along with numerous foreign decorations including Belgium’s Order of Leopold, the Order of the Redeemer of Greece, the Order of St. Maurice and St. Lazarus of Italy and the Order of St. Anne of Russia 3rd class with Swords and Bow. On his father’s death in 1920 he inherited an array of titles, many with confusingly similar names: the Irish barony and earldom of Bessborough and two English titles, Baron Duncannon of Bessborough and Baron Ponsonby of Sysonby, which placed him in the House of Lords.  He built a successful business career, becoming joint chairman of the new conglomerate Unilever in 1929.  From 1931 to 1935, he served as a rather stiff Governor-General of Canada, with Roberte as the first French vicereine, but did help to found the Canadian Broadcasting Corporation (CBC). He earned a GCMG and a seat on the Privy Council in the process.

Never really retiring, Ponsonby was given the British title of Earl of Bessborough in 1937 to add to his collection, retained a Cheltenham connection as a governor of the Ladies’ College and published three books including two volumes of Lady Charlotte’s diaries.  In 1950, he was awarded the grand-croix of the  Légion d’honneur (of which Roberte was also a chevalier) in recognition of his supervision of assistance to French refugees and partisans in Britain during the Second World War.