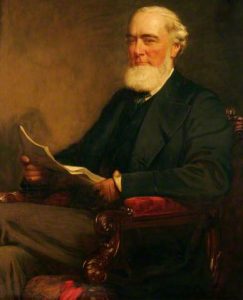 ‘Handsome, gracious and a fair speaker’, Cheltenham’s first Tory MP interrupted an otherwise continuous 30 year run of Berkeley domination following an election ‘in which money was spent like no other’ and ‘every man who had a vote and was willing to sell it was passing rich for many days after, not to say gloriously drunk also.’ Perhaps the Berkeleys were sore losers but no sooner had the Norfolk baronet been elected than he found himself fighting off a petition to unseat him on grounds of ‘bribing and treating’.  Despite a nominal Conservative majority, Parliament voted to unseat him. Barred from the subsequent election, he fought his old adversary Craven Berkeley again in 1852 in what must have been a particularly bitter campaign but lost. He abandoned Cheltenham and was to fight one further election in his native Norfolk in 1865 but lost there too. An MP in the end for only ten months, he would be Cheltenham’s shortest-serving member until the ill-fated Richard Mathias in 1911.

Ironically, by the time of his death at his Cranmer Hall home in Norfolk in 1884, Jones had joined the Liberal Party.