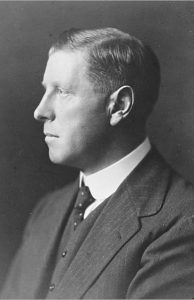 With the death of their veteran MP James Agg-Gardner in 1928, Cheltenham Tories had to search for their first new candidate in 18 years.  They picked Sir Walter Reuben Preston, a wealthy industrialist and former London MP who had won the east end seat of Mile End in the 1922 General Election only to lose it a year later to the rising Labour Party when Tory prime minister Stanley Baldwin sacrificed his majority in a snap election.

At the Cheltenham by-election, however, Labour came to Preston’s rescue.  The Liberals picked another veteran former MP Sir John Brunner but the new Labour Party couldn’t let a high-profile by-election go without standing their first official candidate for the seat – and Cheltenham’s first woman candidate at that.

The Conservative vote dipped below 50% for the first time since their defeat in 1910 but Labour’s Florence Widdowson took nearly 4,000 votes and third place, enough to deliver Preston a comfortable majority over Brunner. Florence, by then Mrs Paton, finally became MP for the Nottinghamshire seat of Rushcliffe in Labour’s 1945 landslide and became the first woman ever to preside over a session of the whole House of Commons.

Educated at Bedford Grammar School, Preston had been an apprentice with the Great Eastern Railway and his name appears on a series of patents for the improvement of steam locomotives.  By the time he became MP for Cheltenham, he had become an accomplished hunter and yachtsman and cemented his establishment credentials with a knighthood. But commerce and technology were his comfort zone and dominated his contributions to the Commons too.  ‘I do not often worry the House for I am a poor speaker’ he began one prescient speech in 1934.  He went on to explain to a complacent mill-owning colleague how far behind Japanese technology the British cotton industry had fallen. He blamed the banks: ‘If you go to a financier and say “will you give me money for Lancashire machinery?”, he smiles at you as if you were loony.’  His solution wasn’t very conservative.  He urged massive state intervention.

The opposition vote remained split in 1929 and Sir Walter’s majority grew to 6,746 despite Labour’s first Prime Minister Ramsay MacDonald taking power at national level.  The financial, economic and political crises following the Wall Street Crash took the Conservatives into MacDonald’s National Government in 1931.  Usefully for Sir Walter, the Liberals split three ways, many supporting the National Government and the party stood no candidates against him in Cheltenham again. His majority over Labour in 1931 was a record 17,261 and, at more than 81%, he won the highest share of the vote since Craven Berkeley’s landslide victory in 1835.

Initially a frequent contributor to debates in the House, Preston’s appearances drop sharply after 1932 and cease altogether after 1934. His Times obituary suggests the strain of combining politics and commerce threatened his health.  If so, it was politics that gave way.  Sir Walter first announced he was standing down and then unexpectedly resigned his Commons seat in 1937.  He died of a sudden heart attack in 1946 – as perhaps he would have wanted, on board his yacht at Cowes.

Preston left Cheltenham an apparently safe Tory seat for the first time in its history. The Liberals were divided and Labour had gone down to crushing defeats in 1931 and 1935.  Surely it was inconceivable that the Conservative Party would lose the subsequent by-election…