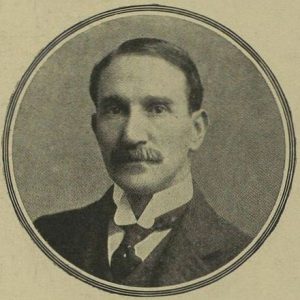 Richard Mathias was the son of an Aberystwyth steamship owner and pursued careers as a barrister and banker in London before returning to the family ship owning firm.  He was a political Radical, supporting votes for all women and men and a national minimum wage – just right for the Cheltenham Liberals looking to replace their sitting MP John Sears who was standing down. The January 1910 campaign must have been a passionate one in defence of Lloyd-George’s revolutionary ‘People’s Budget’ which was being blocked by Tory members of the House of Lords.  But the national swing was against Mathias and despite winning the largest Liberal vote ever of 3,850, Richard lost to – of all people – a Tory aristocrat, the dashing Irish peer Lord Duncannon, by 138 votes.

The chance of rematch came in December 1910 when Liberal Prime Minister Asquith went to the country again to win clearer public support for his attack on entrenched aristocratic privilege in the House of Lords. But in their desperation to unseat Duncannon, Richard’s campaign team overstepped some important marks.  No sooner had they snatched victory by just 93 votes, than his election expenses were challenged.  He took the oath of allegiance on 1 February but by the end of March his agent Mr Kessel had already admitted that he had overspent, illegally paid for lifts to the polls and generally made a mess of the official election return. In court, Kessel and the defence lawyers admitted the errors and made some effort to clear Richard’s own name but they had already doomed the case (the judge told them: “you are putting your client to very large expense with no good to anybody”).  Mathias never made a maiden speech and goes down in history as Cheltenham’s shortest-serving MP.

His reputation doesn’t appear to have suffered fatal damage though as he was knighted in 1913 and created an hereditary baronet in 1917.  He narrowly missed returning to the Commons in 1922 when he stood as an independent anti-socialist in the previously Liberal seat of Merthyr, losing to the winning Labour candidate by less than 2000 votes in a poll that topped 33,000.

His brother Major Lewis Mathias contested the Cheltenham by-election in September 1911 but the Tories brought back the popular old warhorse Agg-Gardner and the Liberals lost after six recounts by just four votes.  It was a fateful moment.  The party would be bitterly divided by the coming war, Agg-Gardner wouldn’t now relinquish the seat until his death in 1928 and the Liberals would not regain it for more than eighty years.