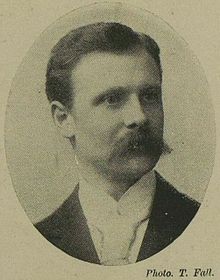 In 1900, the divided Liberals had for the first time failed to find a candidate in Cheltenham at all.  By the 1906 General Election local and national Liberal organisation had revived and the party had reunited in support of free trade and radical social reform just as the Unionist coalition was under growing attack over food prices, the conduct of the Boer War and from nonconformist protestants over the recent Education Act.

The Cheltenham Liberals selected John Sears, a London architect, as their candidate. The son of a Baptist minister, Sears was a Sunday School teacher and temperance campaigner himself.  And in 1906 he was still a senior London county councillor – he had represented Hackney North for the liberal Progressive Party since 1901 – but he promised to be a zealous radical opponent for the old stager Agg-Gardner, who hadn’t actually won a contested election for 14 years. Sears’ lack of a local connection was overlooked as Sir Henry Campbell-Bannerman’s party swept to an historic landslide victory at national level and the Liberals regained Cheltenham for the first time in twenty years.

Under the leadership of Campbell-Bannerman and then Asquith and his radical chancellor Lloyd-George, the Liberal government waged ‘implacable warfare against poverty and squalidness’, introducing free school meals, old age pensions and punishment for child neglect and banning many forms of child labour.  Amongst these huge issues, Sears chose the spectacularly boring subject of Inland Revenue organisational reform for his maiden speech. His subsequent contributions were very frequent but often on the minutiae of tax and public administration, sometimes testing ministers’ patience on issues like the storage of Cheltenham postmen’s capes.  He did take time out to persuade Home Secretary Herbert Gladstone to reduce the sentences of the Leckhampton rioters.

Sears stood down from the London County Council in 1907 but never seems to have really established himself in Cheltenham and stood down from the parliamentary seat ‘for family and personal reasons’ at the next General Election.  He later made an unsuccessful bid to return to Parliament, contesting St.Pancras in London for Labour in 1935.