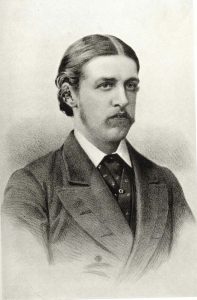 Cheltenham’s longest-serving and first truly local MP fought his first election at just 22.  His father, also James Agg-Gardner, was a local brewery-owner who had unsuccessfully taken on the Berkeley machine as the Conservative candidate in 1841 and 1848.  Young James was born in 1846, the same year in which his father bought the lordship of the manor of Cheltenham, not a true aristocratic title but prestigious nevertheless.  James senior’s untimely death in 1858 left the twelve-year-old heir to his father’s business – and his political ambitions.  He was sent to Harrow but was back in Cheltenham for Schreiber’s historic victory over the House of Berkeley in 1865 and had barely begun his studies at Trinity College Cambridge when Schreiber stood down and wrote to the young undergraduate offering him his support.  James’s memoirs record that his ‘tender years caused some opposition’ but he had some influential backers and had soon abandoned his studies for politics.  He launched his campaign with a rejection of the ‘hide-bound Toryism’ that opposed all social reform.

Agg-Gardner’s first four elections all went with the national swing, making Cheltenham what would now be called a ‘key marginal’.  He was defeated in the Gladstonian landslide of 1868 by another undergraduate Henry Samuelson, but defeated him in turn as his hero Disraeli led the Tories back to power in 1874.  He was out again in 1880 as Gladstone swept back into office and Baron de Ferrières took Cheltenham.  But unlike previous Tory candidates, James stuck to his cause and was back again when Lord Salisbury led the Conservatives to minority government if not victory in 1885. His majority of 804 over radical Punch journalist Rudolph Lehmann was a Cheltenham record. The Tories had obviously adapted successfully to the now much increased electorate with improved organisation including the foundation of a Conservative Club.

Another election soon followed in 1886 over the critical issue of Irish Home Rule, a proposal that with ‘strong disfavour’ in Cheltenham.  Although they initially failed to get back into government, the Conservatives won many seats – and Agg-Gardner held Cheltenham with a majority that now topped 1,000. In 1892 the pendulum swung back to Gladstone’s Liberals yet again. Agg-Gardner’s majority was reduced but this time he held on.  At last his persistence had begun to make Cheltenham a safer seat for the Tories.

Agg-Gardner chose the 1895 contest to stand down ‘for reasons unconnected to politics’ but not explained in his memoirs. He had already been the MP for 16 years and perhaps wanted to focus on the brewery business.  Or perhaps his bachelor status was beginning to raise eyebrows (the Cheltenham LGBT Partnership today claim him as an icon of the town’s gay heritage).  A distinguished soldier, Colonel Frank Russell of Aberdeenshire, was put up instead and saw the Unionist majority drop below 500 despite victory at national level.  The local association lost no time in bringing Agg-Gardner back in time for the 1900 election.  As it turned out, the Liberals were now deeply split over the Boer War and failed to find a candidate in Cheltenham, handing him an unopposed victory.

1906 was another matter.  The Unionist coalition, now under Arthur Balfour, split itself over free trade and Sir Henry Campbell-Bannerman led a radical reforming Liberal Party to one of the biggest landslides in modern British electoral history.  James Agg-Gardner was swept out with the tide and once again headed for political retirement.  His replacement was the dashing young Viscount Duncannon, who narrowly regained the seat by 138 votes in the January 1910 General Election, only to lose it again in the next that December by just 93 votes.  An election petition unseated the Liberal victor Richard Mathias for exceeding his election expenses and a by-election ensued.  Nervous local Tories clearly felt Agg-Gardner was the only man who could be trusted to hold the seat although by this time the veteran campaigner hadn’t actually won a contested election for 18 years .  He scraped back in against Mathias’s brother after six recounts by just four votes, surely the most extraordinary comeback of Cheltenham political history. 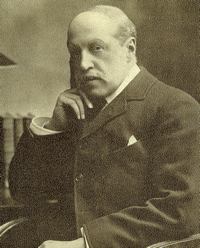 By the end of the Great War, the Liberals had split yet again and in 1918 Agg-Gardner would comfortably hold the seat as the wartime coalition candidate with a majority of 3,285 over an Independent Liberal.  Agg-Gardner voted to stay in coalition with Lloyd-George at the historic Carlton Club meeting in 1922 but went on to beat Liberal opponents at the following elections of 1922, 1923 and 1924.  The Liberals do shave his majority back to 1,344 in the middle election but his ninth victory nevertheless marks Agg-Gardner’s final breaking of William de Cheltenham’s nearly 600-year old record of 8 returns.

Agg-Gardner’s record was very long but quite strange.  He sat in Parliament for a total of 39 years, spread in four instalments over a staggering timespan of 54 years.  Yet he spoke in debate only a few times when he really couldn’t avoid it: twice to introduce his own private members’ bills and once, notably, to move the second reading of the unsuccessful 1912 bill to give women the vote – of which he was one of the very few senior Tory supporters.  It was an unlikely step into frontline national political controversy for the shy moderate and he began apologetically: “I am sorry that this responsible and important duty has not been placed in abler hands”. But he ended an impressive speech with a rousing call for the representation of women who had “won the highest distinction in the realms of literature, of science, and of art, but are yet considered unfitted to enjoy a privilege which, it may be supposed, requires some thought and judgment, and which we freely and cheerfully accord to the least intellectual of mankind. I hope the result of this Debate will be to place on the Statute Book, at no distant date, a measure based on the principles of freedom and justice—a measure long demanded and too long delayed.”  He should have risen to speak more often.

In 1916 he was knighted and in 1917 put his professional knowledge to good use to become chairman of the Kitchen Committee although he failed to stem what he regarded as regrettable trends towards cocktails and smoking in the Palace of Westminster.  So most his parliamentary contributions for years were answering questions about purchasing Jamaica cigars (yes) or Lancashire potatoes (no). He was asked in 1926 if he would restrict sales entirely to British wines and cigars.  “I do not think the suggestion would be very popular” he replied!

In 1924 he was made a privy councillor. He was also twice mayor of Cheltenham but again quite late in his career in 1908 and 1912.  It was as if he was just getting warmed up by his 60s.  Well-liked for his gentle manners and affectionately nicknamed ‘Minister for the Interior’ for his services to Members’ digestion, the Right Honourable Sir James Tynte Agg-Gardner died in office in 1928.