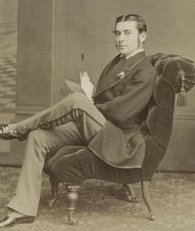 His opponent records a lively contest with candidates publicly nominated “to the accompaniment of  rival bands, cheers, jeers, hisses, and volleys of eggs, dead cats and other missiles”! Heavies were hired to keep the peace (with mixed results) and a great deal of family cash was expended on recreation and refreshment, railway fares for absent voters and patronising various local societies.  Electoral reforms and spending limits would soon see the end of quite such colourful campaigns.

It was a good time to be the Liberal candidate. The party nationally had also broken with its aristocratic leadership and was now led by the dynamic William Gladstone who swept to a landslide victory on a platform of reform and opposition to privilege.  Henry campaigned in particular for universal education and turned the Tories’ narrow majority into a Liberal one of 188. A predictable election petition was heard but dismissed.

Even the kindest friend would have to admit his maiden speech was hopeless.  He chose a debate on the odd subject of the House of Commons Ladies Gallery screen.  According to the official record, he dismissed the suggestion that removing the screen would force ladies to wear evening dress because “it was the custom in society for both sexes to appear in full dress or neither”.  Gales of laughter ensued but Henry missed the joke. But he was a frequent speaker and within a couple of years he was putting in a much more assured performance in favour of the revolutionary 1870 Education Act for which he had campaigned and which paved the way for universal primary education for all.

He also seems to have been active in Cheltenham, picking up the support of the successful woodcarver, businessman and social reformer HH Martyn amongst others.

But the mood of the country – and the state of the economy – was changing.  Disraeli’s Tories had picked up the baton of social reform too and when the 1874 election offered Agg-Gardner and Samuelson a rematch, it was the Conservative who won.  Henry didn’t waste any time looking elsewhere for a seat.  Just two years later he was elected at a by-election for the safer seat of Frome.

Michael Stenton & Stephen Lees, Who’s Who of British Members of Parliament: A Biographical Dictionary of the House of Commons Based on Annual Volumes of Dod’s Parliamentary Companion and Other Sources, Volume 1. 1832-1885, Harvester Press, 1976.