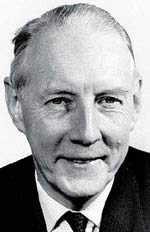 By the time he became MP for Cheltenham in 1964, Douglas Dodds-Parker had already had a more eventful life than most. After graduating from Oxford in 1930 he entered the colonial Sudan Political Service.  When war broke out he first helped Emperor Haile Selassie oust the Italians from Abyssinia and then became a rising star first in the Special Operations Executive’s daring intelligence operations, organising agents and collaborating with communist partisans in the Mediterranean to pave the way for invasion. By then Colonel Dodds-Parker, he finally ended up in Eisenhower’s allied headquarters in Paris. Never recognised for this at home, he was awarded the Croix de Guerre by France and followed the Earl of Bessborough into the Legion d’honneur, perhaps laying the ground for his later pro-European politics.

Dodds-Parker entered Parliament at the first attempt, defending Banbury near his native Oxford against the Labour landslide of 1945.  The next year he married his American wife Aileen. When the Conservatives returned to power, he initially turned down an invitation to become Churchill’s Parliamentary Private Secretary but joined the government in 1953 as a junior minister in the Foreign and Commonwealth Office under Churchill and continued under his successor Eden.  He toured the world and hobnobbed with everyone from Nehru to Marilyn Monroe but his textbook ministerial career was to go horribly wrong.  In 1956 Egyptian President Nasser’s takeover of the critical Suez Canal prompted a secret deal between Israel, Britain and France to invade Egypt, capture the canal and try to topple Nasser. Dodds-Parker, the military tactician and expert North Africa hand, thought it was “a disastrous combination of the unworkable and the unbelieveable” but was too junior to influence events.  Worse still, he had to defend Eden’s doomed policy and deny the secret collusion with Israel (even after it had been revelaed to him) not only to an outraged Commons during his boss Selwyn Lloyd’s frequent absences but also to his many American family friends.  He stayed loyal to his government at war but had fatally damaged his own credibility.  When Macmillan replaced the disgraced Eden, he was sacked.  He quit the Commons at the next election and later penned his own account of events, bitterly entitled Political Eunuch.

When a family legacy lifted financial pressures and a seat fell vacant for the “delightful borough” of Cheltenham, Douglas was tempted back into the fray.  After what he describes as a “slight commotion that a local candidate might be more suitable”, he contested the 1964 General Election, and won with a comfortable 5,240 majority over Labour with the Liberals – now led at national level by the charismatic radical Jo Grimond – in a relatively strong third place. Nationally the Tories lost power to Harold Wilson’s Labour Party.  The defeated party elected a new leader, Edward Heath, who shared Dodds-Parker’s strongly pro-European politics and Douglas soon became part of the Commons delegations to the Council of Europe and the Western European Union.

His memoirs reveal a much greater interest in foreign affairs than in Cheltenham although it’s an interesting coincidence that a second MP with experience of military intelligence – after Frank Russell in the 1890s – should now represent the new home of the UK’s codebreaking and electronic intelligence agency (previously at Bletchley Park) which had discreetly arrived in Cheltenham in the early 50s under the innocuous name Government Communications Headquarters or GCHQ.

Dodds-Parker made frequent interventions in Parliament, especially on European and foreign affairs, but was obviously frustrated in opposition as well as by Heath’s failure to properly recognise his talents any more than Macmillan had.  He often railed furiously against the ‘Socialists’ in government.  The 1966 General Election nevertheless saw Labour, again with no Liberal competition, reaching their highest ever share of the vote in Cheltenham with nearly 47% – only 2,615 votes from victory.

Cheltenham’s early declaration in the 1970 General Election allowed a relieved Dodds-Parker to exuberantly predict a surprise Tory victory on national TV.  He was right but his own result was actually pretty poor.  The Tory vote slipped again to just over 50%.  His comfortable majority was largely thanks to Labour and the returning Liberals dividing the opposition vote.

After Heath led the UK into the European Community on 1 January 1973, the keenly pro-European Dodds-Parker was delegated to become one of the first UK Members of the European Parliament, bizarrely reuniting him with former communist partisans and others from his war days.

But Heath’s turbulent reign at Number Ten became mired in industrial confrontation with the miners and Dodds-Parker, finally recognised with a knighthood in 1973, had already announced his decision to stand down when Heath called and lost a surprise General Election in February 1974.

Dodds-Parker quickly backtracked to fight the seat again but the Tory share of the vote in Cheltenham fell to 43%, its lowest since Daniel Lipson held the seat as an independent in the 1940s.  More ominously for the Tories, Liberal Freddie Rodger had swept into second place ahead of Labour with his party’s highest share of the vote since the 1920s.  This was part of the record six million votes cast nationwide for the party which had an energetic new leader in Jeremy Thorpe and a radical new ‘community politics’ based approach at local level which had delivered a string of spectacular by-election victories.

Forever under the shadow of Suez, Dodds-Parker never returned to ministerial office. He finally did retire as an MP when Harold Wilson called the October 1974 election.

He remained an active Member of the European Parliament until February 1975. Cheltenham therefore bookended our membership of that institution, also supplying one of the last UK MEPs before Brexit, an event which would have saddened Dodds-Parker.  His first hand experience of the horrors of what he called “European civil wars” and the threat of Russia made him a firm supporter of a United Europe and he wrote later with much greater affection for the collaborative European Parliament than for his troubled time at Westminster.

Sir Douglas Dodds-Parker must count as one of Cheltenham’s most distinguished if controversial MPs, a player not just in British national politics but on the international stage.  But in 1974 there was quite clearly an anti-Tory majority in Cheltenham and his successor would have to work hard at home to hold the seat.