Since 1892 Cheltenham College had attracted a number of Jewish students by supporting a Jewish boarding house, Corinth House, where boys could keep to their religious observance.  In 1911 the longstanding housemaster Ivan Nestor-Schnurmann handed over to Daniel Lipson, an historian who had taught at Portsmouth and Bradford Grammar Schools before joining Cheltenham College.  At Nestor-Schnurmann’s request Lipson also agreed to take over as President, Secretary and Treasurer at the struggling Cheltenham Synagogue.

He married Juliet Lyon Barnett in 1914, a keen advocate of women’s suffrage who went on to found the Cheltenham Women’s Voluntary Service in 1938 and was an active WVS leader during the war.

In 1923, the College decided that the time for a separate Jewish boarding house was past and that Lipson’s tenure as a housemaster would have to end in 1932 potentially leaving him with the house on his hands but no income to support it.  Lipson promptly resigned and set up Corinth College as a separate school.  Independence didn’t work out and Corinth College only survived to 1935 with dwindling numbers.

In the meantime, the charismatic Lipson had been elected as a Liberal county councillor in 1925 and a borough councillor in 1929. He was Honorary Vice-President of the local Liberal association and a vocal critic of the Conservatives, publicly preferring Ramsay Macdonald’s Labour government to a Tory one.  In 1935 and again in 1937 he became Mayor of Cheltenham. By this time the Liberals nationally had suffered a three way split, a catastrophic election defeat in 1935 and a financial crisis.  Lipson remained a supporter of Macdonald’s coalition National Government despite its adoption of tariffs in 1932 and the resulting departure of Sir Herbert Samuel’s official Liberal MPs from government. This may have estranged him from the robustly pro-free trade Cheltenham Liberal association although they still didn’t stand candidates against the sitting Conservative and National Government MP, Sir Walter Preston in 1931 or 1935. Lipson remained an advocate for the National Government even after Baldwin replaced Macdonald in 1935 and the administration took on an increasingly Conservative flavour.

Preston had already announced he would be stepping down at the following election but in 1937 he unexpectedly resigned ahead of time due to ill health.  Lipson’s name was discussed as a possible National Government candidate for the resulting vacancy but the local Tories, strongly backed by Conservative Central Office, wanted their own candidate in the by-election, Lieutenant-Colonel R Tristram Harper.  One source¹ mentions an ‘anti-Jewish whispering campaign’ but if the correspondence and speeches in the local papers are to be believed it may simply have been that Lipson wasn’t a kosher Conservative: the Conservative Association chairman declared that he had always believed Lipson to be “one of their chief opponents” locally.

Showing his independent streak again, Lipson stood anyway, rebuffing Harper’s unconvincing offer to stand down at the subsequent election if Lipson gave him a clear run this time.  An association was formed to support him, his former Liberal friends stood aside again and a furious by-election campaign ensued.  Lipson cheekily called himself the ‘Independent Conservative’ candidate and polled 10,533 votes, beating the official Conservative candidate by just 339.

In Parliament, he proved a gifted and frequent orator, making more speeches in his first year than his reticent predecessors Agg-Gardner and Preston had done in decades.  He was at his most passionate in condemning Nazism and he was prepared to support pro-Arab land regulations in Palestine on the basis that ‘at this time, Great Britain’s interests are the interests of the Jew and the Jew has not so many friends in the world to-day that he can afford to quarrel with his best friend’.

Victory in the war brought the astonishing defeat of Churchill by Attlee’s Labour Party in the 1945 General Election.  Labour’s vote in Cheltenham surged too, up to nearly 30% of the vote.  But Lipson’s surged even more.  Standing this time as a ‘National Independent’, he romped home with a majority of nearly 5,000 votes and knocked the Conservative candidate, Major William Hicks Beach, into a humiliating third place. 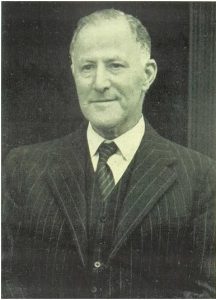 By 1950, it had all changed.  In that year’s election, the positions were almost perfectly reversed with Hicks Beach taking the seat with a majority of nearly 5,000 and Lipson going down to defeat in third place with just 25% of the vote.  Lipson appealed to the electors of Cheltenham with a call for equal pay for women, support for the UN and a United Europe and an optimistic push for another National Government at home. This was a vain hope.  Two-party rivalry had reasserted itself with a vengeance, there was a swing back to the Tories at national level and every other independent MP lost their seat as well.

But it does seems possible that the violent birth of the state of Israel also helped to end Lipson’s distinguished career.  Britain’s sympathetic policy to the Arabs and its role as mandated colonial administrator of Palestine had brought it into increasing conflict with the swelling Jewish population there. In 1946, Zionist terrorists blew up the King David Hotel, killing 100 people in the British army’s local headquarters. Lipson condemned it as a “murderous and senseless outrage” and was outspoken in his criticism of the Zionist campaign to establish a Jewish state, calling for a “solution just to both Jews and Arabs”.  But the situation in Palestine went from bad to worse. In 1947 there were reciprocal executions of Zionist terrorists and British military hostages.  Anti-semitism in Britain increased and anti-Jewish riots broke out in six British cities as the situation in Palestine deteriorated.  The next year Israel was born straight into a war with its Arab neighbours which Britain nearly entered on the Arab side after Israel shot down three British Spitfires over the Egyptian border.

Even the gifted, peace-loving Lipson, who treasured the Jewish relationship with Britain, was going to struggle for re-election as a high profile Jewish MP after all this. He continued an active role in Cheltenham local politics after his defeat and was awarded the freedom of the borough in 1953, an honour given only to Agg-Gardner and Baron de Ferrières amongst his predecessors. He is still remembered in Cheltenham today.

His wife Juliet’s active role in the town continued even after Daniel’s death in 1963 and their daughter Joan went on to become a leading trade unionist eventually becoming Vice President of the clerical union Apex where she helped to achieve at least one of her parents’ ambitions, actively supporting Barbara Castle’s 1970 Equal Pay Act and the 1975 Sex Discrimination Act.

With thanks to Daniel Lipson’s niece Anne Evans OBE for valuable additional material which contributed to this article.