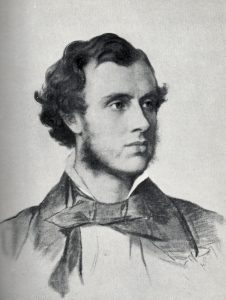 The ‘zealous and eloquent’ victor of 1865 was a former Cheltenham College pupil and prizewinning Cambridge classics scholar.  He was employed as private tutor to Ivor Guest, eldest son of the brilliant, ambitious and rich widow Lady Charlotte Guest.  Lady Charlotte was an amazing woman: by the time she employed Schreiber, she was mother to ten children, running her late husband’s Welsh ironworks (involved in the engineering as well as the business), playing an active and progressive role in local education, and had mastered at least eight languages including Hebrew, Arabic and Middle Welsh, which she used to publish the first translation into English of the Welsh legends known as The Mabinogion (still highly regarded today).

Although Charlotte was herself an “advanced Liberal”, she had been romantically linked to the Tory rising star Benjamin Disraeli earlier in her life and in 1855, with typical flair and disregard for social convention, she married Ivor’s tutor, fourteen years her junior.  They made an unlikely pact not to talk politics but she doted on him and her political experience and connections can’t really have hurt his Conservative political career.

Schreiber was a good organiser, an active canvasser and ‘a forcible speaker’, pitching his arguments well to his still small urban property-owning electorate.  He railed against both the aristocratic fox-hunting activities of the Berkeleys and the threat of Liberal concessions to workers, catholics and nonconformists: “of all the existing forms of government, democracy is the lowest and worst” he declared, “Shall England abandon her Protestant Faith, her Established Church, the blessing she enjoys, for the evils offered to her clothed in the specious garb of Progressive Reform and Civil and Religious Liberty?”  Religious opinion in the town swung strongly behind him.

Tensions ran high at the 1865 poll.  Schreiber had to dodge rotten eggs and dead cats at the hustings but the violence got worse and a Liberal runner was shot dead by a Tory supporter.  Amidst riotous scenes the Tories squeaked victory by 28 votes and promptly had their windows broken by a radical mob. Schreiber astutely left the windows unrepaired for many weeks. He then successfully fought off accusations of bribery in the now customary election petition to take his seat in the Commons where he continued to argue forcefully against the extension of the vote to the poor. 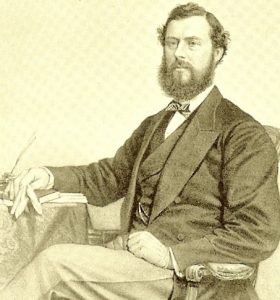 It must have been a bitter blow to the local Conservatives that a man of such great political talents stood down at the next election only three years later, to ‘abandon the quest of politics for that of porcelain’, a passion he shared with Charlotte. He returned to Parliament for Poole in 1880 but died in Lisbon in 1884.  After his death, Charlotte donated all 1800 of the 18th century English china pieces they had amassed together in his memory to the South Kensington Museum – now the V&A – who still regard it as ‘unparalleled’.

The Guest connection to Cheltenham parliamentary history wasn’t quite finished though. Amongst many MPs in the family, one grandson Freddie Guest briefly represented Leckhampton and Up Hatherley as MP for Stroud between 1923 and 1924 in the twilight of a distinguished career as a Liberal MP and minister. Another, Lord Duncannon, represented Cheltenham as a Tory even more briefly in 1910 before going on to become Governor-General of Canada amongst many other distinctions.