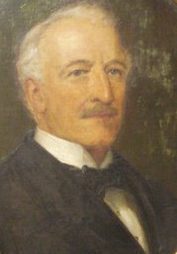 Charles Conrad Adolphus, Baron du Bois de Ferrières, was the grandson of a Napoleonic general whose family had settled in the Netherlands. De Ferrières was born there in 1823.  The family moved to England when he was very young and eventually to Bays Hill House in Cheltenham so, despite his exotic roots, de Ferrières was actually the Liberals’ most local candidate yet.  He was granted ‘letters of naturalisation’ in 1867 – without which he couldn’t have stood for Parliament.

Although he had opposed the establishment of Cheltenham’s mayor and corporation in 1876, the handsome and flamboyant Baron joined the triumphant Liberal majority in the first municipal elections that year and succeeded fellow Liberal William Nash Skillicorne as mayor in 1877.  ‘His mayoralty’ commented his rival Agg-Gardner ‘was marked by generous hospitality.  In the presence of the Baron, maces and loving cups winked right joyously as knowing who was their friend’. He was ‘a picturesque citizen and a sincere lover of Cheltenham.’

When former MP and candidate Henry Samuelson departed for political pastures new, the Liberal party needed a candidate with stature and popularity and the larger-than-life figure of the Baron was the obvious choice.  Gladstone’s reforming zeal delivered a landslide Liberal victory nationwide but de Ferrières only squeaked home in Cheltenham by 21 votes.  He was an active MP but it must have dismayed the local party that he declined to defend his tiny majority five years later – Agg-Gardner suggests he had ‘had enough of St.Stephen’s and of the rather insistent demands made upon him’. With Gladstone’s popularity waning the loss of the parliamentary seat in 1885 was pretty inevitable.

But the indefatigable Baron went from strength to strength outside Parliament and is best remembered for his gift to the town in 1899 of his Dutch masters painting collection and £1,000 to establish Cheltenham Art Gallery.  His obituary said there was ‘scarcely a society or charitable institution in the town that [had] not benefited from his support’.  He is remembered by a suitably extrovert monument in St.Peter’s churchyard in Leckhampton.