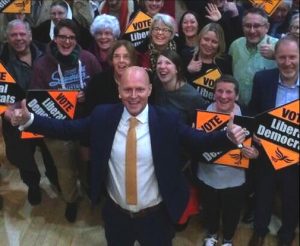 Councillor Max Wilkinson has been elected by local Liberal Democrat members as their new parliamentary candidate.

Former Lib Dem MP Martin welcomed the news: “Max is a terrific local campaigner, a good friend and he works to get things done. Unlike the Conservative MP, he lived and worked in Cheltenham before becoming a parliamentary candidate here. He’s already working hard for local people as a member of the borough council. I have every confidence that with Max in the lead, we can close the slender gap between us and the Conservatives at the next General Election, whenever it comes.”

“Cheltenham badly needs a new voice for tolerance, internationalism and openness in Parliament, and the country badly needs an alternative to this shambolic, divided government which is going to drive us over the cliff-edge of a very hard Brexit. So that election can’t come soon enough.”