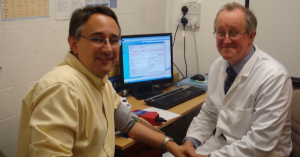 Millions are being cut from the government’s support for local community pharmacies and Cheltenham’s former LibDem MP has added his voice to those of pharmacists who are raising the alarm. The cuts are to the Community Pharmacy Contractual Framework which pays local pharmacists to provide minor ailment services and public health advice, reducing pressure on GPs and the NHS.

The Department of Health (DH) plans to reduce funding by £170m from October 2016 as part of the government’s comprehensive spending review.

National pharmacists’ representative Sue Sharpe has said the cuts “will deliver a destructive blow to the support community pharmacies can offer to patients and the public.”

Former Cheltenham LibDem MP Martin Horwood says the cut could have a real impact in the town. “Local pharmacies like Badhams have hugely increased the range of services and advice they provide to local people. They don’t just dispense pills these days. They can take your blood pressure, give you lifestyle advice and review medication. The clear direction in Gloucestershire and nationally in recent years has been to support community pharmacy and take pressure off GPs and the local NHS.  Now the new Tory government is putting that policy into reverse.”

The cuts are all part of Chancellor George Osborne’s plan to cut faster and deeper than the coalition government.  Lib Dem ministers distanced themselves publicly from Conservative spending plans before the 2015 election.

Leading local pharmacist Peter Badham says “The future of community pharmacy is at a crossroads.  Patients are receiving mixed messages: pharmacy first, use your local pharmacy for minor ailments, flu vaccinations, advice on medication and so on.  And then that up to 3,000 chemists will close!”

“It is clear the cuts are going to implemented, with no negotiation or consideration of impact on patients'” he added.