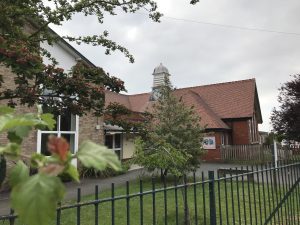 The only school actually in the Leckhampton ward at the moment is Leckhampton CofE Primary School in Hall Road, an outstanding local primary school which currently has around 430 pupils.  Leckhampton’s headteacher is Miss Sam Porter.  A proposal has recently been made and approved by the county council’s Conservative cabinet member for education, Cllr Lynden Stowe, to increase the size of the school to 630.  See more about this decision in my update here.

There is no secondary school in Leckhampton ward at present but the brand new High School Leckhampton, led by headteacher Helen Wood, is due to open its doors in Farm Lane  this September. HSL is a co-educational comprehensive secondary school with a local catchment area covering mnost of Leckhampton (which will close the old ‘Leckhampton corridor’ roughly along the Old Bath Road where generations of students struggled to get into any of their top preference schools).  It will eventually have a capacity of 900 pupils. Although not yet on its home site, the school already exists and has been admitting pupils on a temporary site at Balcarras in Charlton Kings.  Both schools are part of the Balcarras Trust.

You can read more about all of Cheltenham’s schools here.