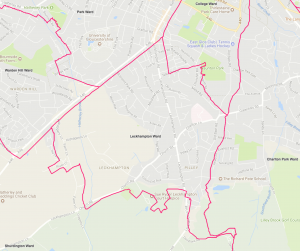 Leckhampton is a vibrant, friendly community to the south of Cheltenham.  Dating back at least 1000 years, the name is formed from the Anglo-Saxon words for vegetables (leek), water meadow (hamm) and settlement (tun).  For more about Leckhampton’s occasionally radical and turbulent history, click here.

Today’s Leckhampton ward stretches from the Norwood Arms (at the junction of the Bath Road, Shurdington Road and Leckhampton Road) in the north up to the lower slopes of the Costwold escarpment and Area of Outstanding Natural Beauty at Leckhampton Hill itself in the south.

The ward elects two councillors on Cheltenham Borough Council and (along with neighbouring Warden Hill) one county councillor to Gloucestershire County Council.  It has its own elected Parish Council, again shared with Warden Hill and on very slightly different boundaries.

Politically, Leckhampton elections are usually a tight race between the Liberal Democrats and Conservatives.  Martin was elected as the Lib Dem borough councillor in May 2018, just 13 votes ahead of the Conservative, and re-elected in May 2022.  Our former county councillor Lib Dem Iain Dobie sadly narrowly lost his seat in May 2021 to the Conservative who now holds that county seat.  Other parties always come third or fourth here so, under our voting system, voting for them instead of the Lib Dems just helps the Conservatives win.  Find out more about Leckhampton’s local representatives here.

Leckhampton has many local clubs, societies and campaign groups, three local pubs within the ward and many more close by. It has a village hall, an outstanding local primary school, a great new secondary school opening here in September, nurseries, a local surgery, local vets and a scout hut we’re hoping to make even better soon. For more about schools in and near Leckhampton, click here. We have a surprising variety of local businesses and one international charity.  We enjoy allotments and popular and accessible local green spaces, including an unusual urban nature reserve below Pilley Bridge.

Leckhampton is a lovely, friendly place to live and local neighbourhoods are lucky enough to rank amongst the 10% least deprived in Gloucestershire and in the UK judged by income, employment, health, education, crime and living environment.  But it’s important we all remember that not everyone in Leckhampton is well off and many local people have to work hard to make ends meet.

Our other challenges include traffic congestion and traffic pollution, the state of local roads, poor public transport, access to popular local schools, managing the impact of new development as well as permanently protecting our remaining green spaces.  And, in common with many parts of Cheltenham, the downside of such a high quality of life is a level of house prices that makes the area barely affordable for many young people and families. In Leckhampton we’re sticking to the Lib Dem pledge to deliver 40% of every new development as affordable housing and making sure we do everything we can to help recovery from the pandemic.